Dad was a chaplain in the US Navy and we moved around somewhat. So in my

four years of high school, I attended four different schools: two in Southern California, the third near Boston, and I graduated in Charleston, South Carolina in 1964.

In April of 2016, the USS Yorktown, CV-5 Survivor’s Reunion was held in Charleston, and I was chaplain for the group. One day, Carol and I drove over to James Island to locate the house my parents rented and the high school I attended. This was the first time I had returned to the Charleston area since May of 1964, but I located both house and school without a hitch. They hadn’t moved.

Memories flooded my mind, and I verbally relived many of them while Carol listened. (I met Carol in Southern California in late August of 1964.) When my parents lived in the Charleston area, we didn’t visit Fort Sumter which is situated in Charleston Bay. Perhaps that was because renovations, beginning in 1961, had not been completed. But now I was looking forward to visiting the fort.

Fort Sumter was named after General Thomas Sumter – a hero in the Revolutionary War. Built primarily by slave labor, construction of the fort was started in 1829 but was still incomplete in 1861 when the War Between the States began.

There are several names for that war, and each name reflects the feelings of various groups through history. A well-accepted name is The War Between the States. Many northern folk called it The War of the Rebellion, while many Southerners called it The War of Northern Aggression. Some Europeans called it The War of Secession, but the common name here in modern America is the American Civil War. But as Colonel Butch Quick said, “There was nothing civil about it!” Well over 625,000 Americans died in that hellish conflict.

Many believe that the war was not primarily about slavery. As an example: South Carolina’s General James Longstreet is quoted as saying, “We should have freed the slaves, THEN fired on Fort Sumter.”

Understanding that South Carolina was thinking about seceding from the brand-new Union as early as 1827, Fort Sumter was not built to keep South Carolina in line; the fort was one of a series of fortresses built along our eastern coastline to protect our major ports from potential European aggression.

Our tour boat backed away from the wharf and sailed around the bow of the USS Yorktown, CV-10, that was docked nearby. The Yorktown (built to replace the USS Yorktown, CV-5 that sunk in the Battle of Midway in June of 1942) was commissioned in 1943 and is huge; but with its flight deck looming 50 feet above our heads, it looked enormous.

A twenty-minute cruise toward the Atlantic Ocean, Fort Sumter looked small with walls currently about 15 feet high. However, seventy thousand tons of New England granite had originally been imported to build the 5-sided Fort Sumter on the harbor sandbar; and the walls in 1861 were 5 feet thick and 50 feet high. It was designed to house 650 men with 135 canons.

The fort was built to withstand a naval assault using small, ship-mounted guns, but it could not long endure the massive bombardment from the shore-based gun batteries. Even though there were no casualties during the 36-hour bombardment, Major Anderson finally realized that the situation was hopeless.

Therefore, to save the lives of his men, Major Anderson raised a white flag. Deciding not to capture the Union forces, General Beauregard provided a boat and personnel to take the Union soldiers to a Union ship waiting off shore. Note: two years later in the heat of the war, on September 8, 1863, Union naval forces, using larger guns, attempted to regain control, but failed. Again, the fort was severely damaged.

Ninety-eight years later, South Carolina and the US Government agreed to restore Fort Sumter and make it a National Monument with a Visitor Education Center. This was being completed as I graduated from high school just across the harbor on James Island.

Fifty-two years later, I returned with Carol and the USS Yorktown CV-5 Survivor’s group, and finally had the privilege of touring the fort. I was impressed with the history and the restoration. If you have the opportunity, I would encourage you to visit Fort Sumter.

Several years ago, Carol and I were in San Diego, California to officiate at a

military funeral for a good friend. Victor was a WWII veteran, and served on the USS Yorktown, CV-5, with my father. The Yorktown was sunk in the Battle of Midway, but most of the crew survived. Vic and my father were members of the USS Yorktown CV-5 Survivor’s Club, and dad was the chaplain. When I attended the CV-5 Reunion in 2006 in Albuquerque, NM, only twenty survivors were in attendance, along with family members and friends.

When Dad died in February of 2010 at the age of 89, I was asked to take his place as chaplain. Nine WWII survivors plus family members and friends attended the 2010 Reunion in Little Rock, AR. Five years later at the funeral, Vic left this life at 94 years of age. It’s always sad to see a loved one depart.

Victor and dad were Christians, and we know where they are: in heaven. Death for a Christian is a joyful kind of sorrow. Although we’re glad they no longer suffer, it still hurts to say goodbye. But when a Christian dies – or graduates – the goodbye is not final.

First Thessalonians 4:13-14 is the basis for our joy in sorrow. It says: “And now, brothers and sisters, I want you to know what will happen to the Christians 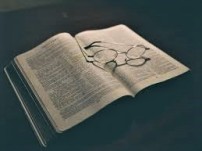 who have died so you will not be full of sorrow like people who have no hope. For since we believe that Jesus died and was raised to life again, we also believe that when Jesus returns, God will bring back with Jesus all the Christians who have died. (NCV)” Therefore, death for the Christian is only a temporary parting.

Does everyone go to heaven? I wish everyone did. I’ve thought long and hard about it over the years, and I shudder to think what many folk are experiencing who died without submitting their lives to Jesus Christ. I fear for those who will yet reject Christ knowing that, after death, they will live throughout eternity in torment. Although God wants all people to be in heaven (John 3:16, 2 Peter 3:9), not all people go there.

But if you’re breathing, it’s not too late. As the man on the cross, adjacent to Jesus at Calvary, asked for forgiveness in his last hour of life and entered paradise, we also can repent and go to heaven.

The only way to heaven is to choose to live for Christ and obey Him while we are yet alive. Jesus died to redeem mankind. Defeating death, He returned to life and lives forever. He wants you to live forever with Him. In heaven you will never have to lock your doors again. You’ll never be afraid or be hurt again. There will be no more death. However, before Jesus returns, we get to heaven by going through the door called death. 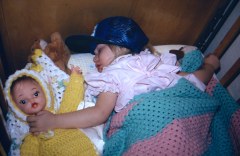 What does that feel like to die? Many times our kids fell asleep on the couch or on the floor of the living room but woke up in their bed. In the morning they asked, “How did I get here?” My Precious wife told them, “After you fell asleep, your father picked you up and took you to your room.”

That’s what death is like for the Christian. Whether we leave this life because of sickness, an accident, or old age; we merely fall asleep here in our “living room”, but we wake up in Heaven because our Father takes us to our new home. A Christian should never fear death. For the Christian, there can be joy in sorrow.

Are you living the way God wants you to live? If you died today would you go through the door that I call LIFE and live with Jesus, or go through the other door? Is there anything you need to ask God to forgive you for? Don’t be afraid to talk to God about it. He loves you very much and wants to forgive you. He wants you in Heaven with Him (2 Peter 3:9).

Victor and dad were shipmates and friends in this life, and they are continuing their friendship in heaven. Who knows: they may be visiting together right now. I’ll be in heaven sometime in the future, and I hope to see you there.