While employed at the Los Alamos National Laboratory, Los Alamos, NM, Linzey studied writing and public speaking. As an Operations Officer in the Nuclear Physics Division, he oversaw risk-management documentation, monitored the cost and progress of various experimental projects, created and delivered project presentations, was a safety officer, and interacted with inter-lab and governmental agencies to ensure that his group met federal, DOE, and state requirements.

He worked thirteen years in the aerospace industry, and two years in direct sales.

A published author, he has, also, written for newspapers since 2001. His current series is titled Reflections on Life in the Herald-Leader in Siloam Springs, AR, who then distributes the Reflection articles to other newspapers. He’s written character-based articles for the scientific community, and between 2001-2004 had a weekly radio segment at a New Mexico radio station. He has been a featured speaker at churches, civic clubs, businesses, and other organizations.

Having completed Character First!(R) training, he enjoys helping people understand life more completely, for their outlook on life will make a difference in what they do in life, and how they interact with others.

His passion is writing and helping people understand how to live a more vibrant, more productive life. He has served as speaking and writing judge for contests sponsored by the VFW, public and private schools, and other civic groups, and has been a contributing writer for Character First – now Strata Leadership®. In his Reflections on Life series, he uses every-day events to teach morals and ethics.

Personal interests include music (clarinet, brass baritone, singing with his wife and in quartets and choirs), digital photography, travel, sports (football, racquetball, tennis), writing, and, of course, spending time with family and friends.

Gene and Carol were married in August, 1966, and still enjoy traveling together. 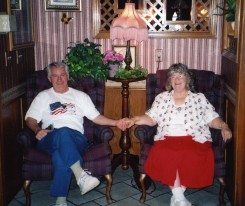 After resigning all his social and ministerial positions in 2018, he and his bride, whom he always calls “Precious,” traveled across the country in an RV to see this great land God created. They enjoy life together – even after 53 years of marriage. But it also gives him time to complete much of the writing he has on the drawing board.

They have five grown children, and 36 grand-children – at last count, and one great-grandson. But don’t expect Gene to remember all the names; that’s Carol’s job. Much of their travels in the past several years have revolved around visiting the children and grandchildren.

His favorite scripture is John 4:32-34 which says, Jesus said to them, I have meat to eat that you don’t know about. The disciples asked, ‘Has anyone brought him something to eat?’ Jesus said, ‘My meat is to do the will of him that sent me, and to finish his work’.