Many of nature’s storms are, at least indirectly, caused by heat. Solar radiation heats the atmosphere, the land, and the oceans; and the oceans and land mass release heat back into the atmosphere. The atmosphere, including the jet stream, reacts in a manner that attempts to equalize the heat around the earth. All this may be an over-simplification, but I hope you pick up the idea. 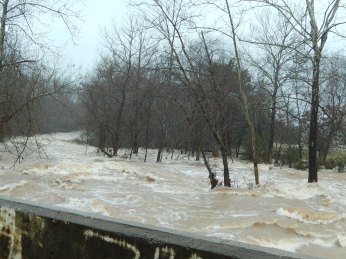 Ocean water evaporates and massive amounts of warm, moist air rise. As the air rises, surrounding air, also laden with water, moves in to replace it and ascends in the unseen elevator. The invisible water condenses as it cools down in the upper atmosphere and forms a cloudy, swirling mass. Keep in mind that the water is going to be dumped in some form, by some method, somewhere. Also on land, the warm air rises and forms unseen columns of air spiraling into the heavens. Have you seen eagles or hawks circling effortlessly thousands of feet in the air? They ride up the atmospheric elevator and hang out there waiting for a hapless mouse, rabbit, squirrel, or ground hog to move. Then breakfast!

These thermal activities can produce billowy clouds, kite-flying winds, cool afternoon breezes, gentle rains, and picturesque snow falls; or devastating hail, tornadoes, floods, hurricanes, and massive snow and ice storms – depending on the time of year and the jet stream.

Did you know that the total number of flash flood deaths has exceeded tornado fatalities during the last several decades? And hail causes more monetary loss than any other type of thunderstorm activity. Annually, the United States alone suffers about one billion dollars in crop damage from hail. Hail rarely kills people, but that didn’t mean much to the Chinese in May of 1986 when 100 people were killed, 9,000 injured, and 35,000 homes destroyed by an intense hailstorm.

Through the years, man has studied climate all around the world. He has figured out what parts of the earth will get the most rain, the most snow, and what parts will stay mainly dry. Man can figure out when the next hurricane is coming, how big it is, how fast it is moving, and how powerful it is. Man is smart. God made him that way.

However, man often has a difficult time figuring out where and why personal storms hit. These storms are physical, emotional, psychological, vocational, relational, and spiritual.

We all have storms in our lives. Did you lose a job or house, a parent, spouse, or a child? Have you been insulted or slandered? Have you lost your reputation, position, or ministry? Have you been hurt by the economic downturn? Do you have a major illness?

Storms of all sizes and types are an integral part of life. But as devastating as the storm may be, it is our reaction to the storm that exacerbates the problem. When the heat of life is turned up, many folk take on a negative frame of mind and cannot properly understand the circumstances or assess the situation. Many people have gone into depression, shock, rage, even committed suicide after a major loss. People try hard to regain some sense of control over their lives, and sometimes it seems to be a hopeless attempt.

So what should we do?

When a child has a question or a problem, he should turn to a parent or teacher. When an adult has a question or a problem, he should turn to his employer, mentor, doctor, pastor, or sometimes the internet for answers. But a major source for the answers to life’s problems is the Bible. The principles for proper, wholesome living have been there for centuries, and are immediately available at our fingertips. Since we cause many of our own bumps in life, we can learn how to change (Romans 12:1-2, II Timothy 2:16). Psalms and Proverbs provide the principles for handling almost any situation that life can present. You may scoff at that; but when you recognize and admit your need for help, God will be waiting for you. We don’t need to be overcome by the storms of life.

16 Replies to “Storms of Life”