In the late 1990s, Carol and I were visiting her mother

and step-dad in Pagosa Springs, Colorado where they owned a cabin on Pagosa Lake. Charles and I had become life-long friends and we enjoy fishing together. (My mother-in-law has since graduated to heaven, and the cabin was sold.)

“You want to go fishing out on the lake?” Charles asked.

“Sure, I suppose so; but we always catch our limit of Rainbow trout from your dock. Why fish from a boat?”

Charles’ neighbor, Frank, had a trolling boat and took Charles fishing in it somewhat often. The limit from the boat was still the same, but Charles said they catch bigger ones out on the water.

Within the hour, the boat was ready, we had our poles, tackle-boxes, bait, nets, and Coca Cola, and we headed out for an adventure.

Frank told me, “Throw your line out in back of us.” I had a new pole called an “Ugly Stick” with a Shakespeare reel, and the yellow and green Rooster Lure flew about 100 feet. Frank’s next order was, “Now, just hold the pole perpendicular to the direction of your line and wait for the trout to visit you. When he hits, don’t point the pole in the trout’s direction; keep it pointed 90 degrees from him. Just reel him in steadily and let the flexing pole do the work.”

We were trolling slowly, and within three minutes I felt a tremendous yank and my pole doubled over. But just as quickly, it popped back straight.

Frank had fished Pagosa Lake for many years and caught 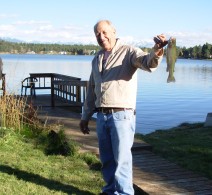 his limit every time. He said, “I know what’s out here, and the way your pole bent over, that was a 20-incher. Reel in your line.” When I found the end of the line, the lure was gone.

“No, but I always catch fish.”

Frank and Charles started laughing. No they weren’t mocking me; they just thought it was funny that a man in his 50s could fish for years and never know what drag was. I began laughing, too, and handed my Ugly Stick with a Shakespeare reel to Frank.

The drag is actually an apparatus made from a pair of friction plates inside the reel. The tension has to be set to release quickly to keep the line from snapping when the big ones yank on it. Then as we reel the critter in and the fish puts up too much of a squabble, the friction is overcome, allowing the reel to rotate backwards just enough to keep the line from breaking.

Frank explained drag, and showed me how to set it. He then set it for the trout we were after and said, “You’ll need to adjust it for stream-fishing back home.”

We proceeded to fish for an hour, and each of us and several friends caught our limit of three Rainbow trout. The two 17-inchers I caught put up a fuss and took a minute or two to bring in. And yes, the drag function worked properly. But an 18-incher put up a fight! Taking almost three minutes to reel it in, I was grateful that Frank set the tension for me. Back at the cabin, Carol cooked the big one like a salmon, and it was GOOD! The left-overs were made into trout-fish sandwiches which tasted much better than tuna-fish.

By the way, the little ones – eight to thirteen inchers – don’t pull hard enough to break the line, and I have never reset the drag.

Reminiscing on that recently reminded me of everyday life. Do you find that the pressures of life are too much, and you feel like snapping? Do you feel like giving up? How’s your emotional drag set?

Don’t trust your own wisdom, for you’ll be disappointed.  And don’t give up because help is just a prayer away. So trust in the Lord with your entire life. In everything you do, acknowledge the Lord, and He will guide you (Pro. 3:5-6). You are secure in God’s hands because He will help you set your emotional drag.