Some time ago, a man asked: “Pastor Linzey, I am sure you have heard about Eve talking

with a snake in the Garden of Eden. Do you really believe that non-sense?”

I’ve been asked that question on numerous occasions, but normally it’s worded a little more kindly.

The Scripture in question is Genesis 3 which starts with (KJV), “Now the serpent was more subtil than any beast of the field.” The narrative continues with Eve carrying on a conversation with this being; then verse fourteen says, “And the LORD God said unto the serpent, because thou hast done this, thou art cursed above all cattle, and above every beast of the field; upon thy belly shalt thou go, and dust shalt thou eat all the days of thy life.” This story is crucial to understanding the history of mankind, the Bible, and our faith.

Several different Old Testament words are used for serpent and the translations or applications are: serpent, snake, image, dragon, fleeing

serpent, whale, sea monster, river monster, dinosaur, fiery serpent, majestic beings, seraphim, afraid, worms, and crawling.  The word for serpent in Genesis 3:1 is nachash and has been rendered serpent; not because it was a snake, but because it hissed. In medieval literature we read that witches hissed. This word hiss means to prognosticate (know the future), whisper a magic spell or an enchantment. Snakes cannot do that, and that is the first clue that the serpent was not an animal.

Another thing to consider is that snakes don’t have vocal chords. That’s the second clue.

The serpent (snake) was considered a type of god in many other cultures around the world, and even in parts of Europe up to the 18th century. For example:

>Ningizzida (supposedly the ancestor of Gilgamesh) was sometimes depicted as a snake with a human head, eventually becoming a god of healing and magic.

>The Cambodian Khmer people are said to be the descendants of the Naga (snake god) – Princess Soma – and her husband. 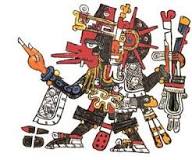 (feathered serpent depicted here), was the principal god of the Aztecs.

>The word serpent is of Latin origin (serpens, serpentis), is commonly used in a mythical or religious context, and was often related to deity.

Where am I going with this? Eve was not approached by a snake climbing a tree and eerily hissing or whispering at her. Eve, created in the image of God, would not have been persuaded by a lowly animal – even if it could talk.

It was, also, Lucifer, the fallen arch angel – not a snake – who met with and tempted Jesus in the desert. The Apostle Paul said (2 Corinthians 11:14) that Lucifer can appear as “an angel of light” (knowledge). God created Adam and Eve, and granted them more wisdom and knowledge than any other humans in history. They didn’t have a sin nature so they could not be tempted to sin. But God instilled a free will so they could make their own decisions.

The phrase “on your belly and dust you shall eat” is an old curse still used in the Middle-East today, and is meant to humiliate someone; but it doesn’t mean that the person will actually grovel in the dirt and eat dirt.

Conclusion: Eve, who had not seen God as Adam did, did not converse with a snake. Lucifer appeared in a form (Angel of Light) that resembled Adam’s description of God. We do not disdain or disparage women because of Eve. She was not ignorant or stupid: Satan tricked her. Eve was the most intelligent and the most knowledgeable woman ever to grace this planet. But Eve did not speak with a snake; rather she spoke with a being who looked like Adam’s description of God.

2 Replies to “The Serpent”