Said the shepherd boy to the little lamb, “Do you see what I see?”

Way up in the sky little lamb, “Do you see what I see?”

A star, a star, shining in the night, it will bring us beauty and light.

It will bring us beauty and light. 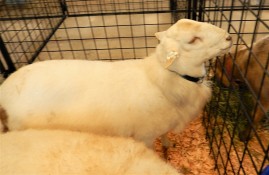 Thinking about that song brought many thoughts to my mind.  Allow me to share them with you.

The shepherds, watching their flocks out in the field, looked up into the cool fall sky. Suddenly, one of the shepherds jumped up and cried out, “Look! Do you see what I see?” The others quickly looked – and in Luke 2:10-12 the lead angel made the announcement as the other shepherds shielded their eyes from the bright light:

“Do not be afraid. I am bringing you good news that will be a great joy to all the people. Today your Savior was born in the town of David. He is Christ, the Lord. This is how you will know him: You will find a new-born baby wrapped in white cloth, lying in a manger.”

The shepherds, following the heavenly directions, quickly went to the cave or animal stall where Joseph and Mary were. When they saw the new-born baby who was declared by the angels to be God, one of the shepherds slowly knelt down, and incredulously asked, “Do you see what I see?” And their lives were changed forever!

Anna, the 84-year old prophetess, was in the temple when Joseph and Mary brought Jesus in to be circumcised and blessed. When Anna saw the 8-day old Baby in Mary’s arms, she said gently and worshipfully, “Do you see what I see? I thank you, O Great Jehovah, for allowing my eyes to see the salvation of Israel.” She then prayed over baby Jesus, and began telling everyone what she saw: “People listen. This Little One is the Messiah for whom we all have been waiting. Let’s Worship the King!” And her life was changed forever!

The Wise Men spent much time studying the sky. They were the scientists of their day and were advisors to their king. They were probably from Persia, which would include

Iran and Iraq today. One night, one of the astronomers suddenly called to his colleagues, “Look! Do you see what I see?” The others gathered around and were amazed at the startling message unfolding in the sky, for it told them that a new King was born in Israel. Because of the writings left by Daniel back around 560 BC, they had been expecting it, and within six months, they left on a caravan for the Promised Land. Finding the house and kneeling down in front of Mary who was holding the child who was nearly a year old, the noblemen worshipfully said:

Here, most highly honored King, exalted by God in the heavens. We give you Gold: a treasure which does not tarnish or rust, it is a gift to royalty and conveys our life-long worship to you.

We give you Frankincense: an aromatic treasure which we hope conveys the aroma of our love and adoration of You to the exalted God in the heavens.

And we give you Myrrh: to make Your life on earth sweet.

And their lives were changed forever!

Do you see what happened? Whenever people encounter the Living God, their lives are changed! And when someone’s life is truly changed, that person will change the world around them.

As the shepherds went back to their flocks, they told everyone they met about the new Messiah for months to come because their lives had been changed. And they changed their world as they spread the Good News.

At eighty-four, you know that she told people about the new Messiah for the rest of her life because her life had been changed. And she changed her world as she told folk who came to the Temple to worship.

And the Wise men made an international impact, for they changed their world which

was the Middle-East. They told people in the trade caravans, the scientific community, kings and nobility about the new King.  That’s because their lives had been changed.

Has your life been changed? Do you tell people about Jesus our Savior, or are you afraid of offending someone? God is calling you to change your world by being a faithful witness about what you have both seen and heard. Go ahead – people need to hear the Good News.

Have you seen what I have seen?

4 Replies to “A BLESSED CHRISTMAS”