I don’t know the best way to describe this man, but his life was a mess. I’ll call him Joe. He was recently fired from his job, and his wife filed for a divorce with

a corresponding restraining order. His children – one was nine years old and the other fifteen – were afraid of him. Simply put, he was an alcoholic and was abusive to his wife and kids.

Joe started drinking alcohol in elementary school by sneaking it when his parents were away from home. Oh, the family went to church and put on a good façade for the community; and most folk thought they were a fine family. Very few people knew the mental and spiritual torment the family was experiencing.

Because they had their own problems, Joe’s parents didn’t learn of his alcohol problem until Joe left home. After Joe’s parents’ messy divorce, his father committed suicide.

As Joe entered adulthood, he prided himself in being able to drink on the job, 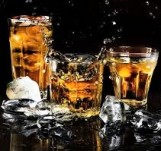 yet effectively perform his vocational responsibilities. As with so many alcoholics, he thought he was hiding the problem; but his friends, vocational associates, and family were covering for him.

Let me say here: “protecting” the alcoholic is the worst thing anyone can do for him or her: it prevents potential recovery. We shouldn’t condemn the alcoholic, but don’t cover for them.

Joe’s life went from bad to worse. I won’t go into the details, but the police department began building a file on him. Then Joe remembered his dad. Swearing early in life never to be like his father, Joe had, in reality, become just like him. Now, thinking there was nothing left in life for him, Joe found himself considering the same final action: suicide.

He stole a pistol and ammunition, robbed a liquor store (took whiskey and money), and went to a motel in a run-down part of town. Sitting on the edge of the bed with loaded weapon in hand, he thought maybe he should write a note to explain to whoever found him why he did it. Opening the top drawer in the nightstand to get a pen and paper, he became angry when he realized that the cheap motel wouldn’t even provide writing material. But he did see a book in the drawer.

Curiosity prompted him to look into the book before killing himself, so he picked it up to see what it was about. The title on the cover said, “Holy Bible”, and there was a round logo on the bottom with the words, “Placed by The Gideons.”

“Who are they?” Joe wondered as he opened the Bible. It seemed to fall open to the Gospel of John, and Joe began reading something he had never read before: “In the beginning was the Word; the Word was with God, and the Word

was God.” Joe wondered who the Word was, so he kept reading. Verse fourteen started with, “And the Word became flesh and dwelt among us….”

This was all new to Joe. Having nothing to lose, he decided to read a lot more before ending his miserable existence. By the time Joe had finished reading the Gospel of John, it was getting light outside and tears were running down his face. Something was happening inside of him. He blurted out, “Do you love me, Jesus?” No Answer.

Hiding the firearm, Joe called a local church. “There’s probably no one there to answer my questions” he muttered to himself. But amazingly, the pastor answered the phone. After listening for several minutes, the pastor invited Joe to breakfast. Time with the pastor lasted through lunch and into dinner. Joe finally met someone who could answer many of the questions he had asked for most of his life.

Because of that Gideon Bible, Joe reached out for help.

At thirty-eight years of age, Joe was introduced to Jesus Christ and Joe’s torment was over. Don’t misunderstand: he still had many issues to face and reconcile; but the pastor promised to walk with him every step of the way if Joe would give him the gun and whisky, and permit him to call the police. Joe did, and his healing began.

God’s word in that Bible, backed up by someone who cared, saved Joe’s life. This is only one of many thousands of real-life examples of how the Lord saves and changes lives.

If you are facing frustration, misery, and confusion, don’t end your life. Instead, start a new life with the One Who loves you and died for you. Turn to Jesus. He might not solve all your problems, but He can guide you and help you do what’s necessary to solve them. And find a Christ-honoring friend who can lead you in the right direction.

Your future doesn’t need to look bleak – it can look bright.