The subject of intolerance comes up often. Emotions sometimes get in the way and people lose sight of reality. But what is intolerance?

The root is tolerate, and the widest definition is: to permit, allow the existence of. Therefore, intolerance in the public arena today is the unwillingness to consider other ideas; not allowing beliefs that differ from your own. So, who are the culprits?

Some folks insist that only Christians are intolerant, but that is not true. Political, ethnic, and religious intolerance has existed for more than five millennia; and there is a monumental misunderstanding of who is being tolerant or intolerant today.

However, the governments of western nations, including America, are giving political recognition to homosexuality and the LGBT rights movements, while in many instances they are denying the right of Christians to practice their faith. In that sense, these governments are tolerant of the gay rights movement, but have joined the Moslems and others in becoming intolerant of Christianity.

Our American Congress is supporting the “rights” of non-Christians to talk against Christianity, but in some cases is denying the same freedom of speech to the Christian community. That means our Congress is tolerant of the gay-rights movement, but is becoming intolerant of Christianity.

When a Christian quotes the bible — not just his/her own viewpoint — concerning God’s thoughts on sexuality, marriage, and man-woman relationships, the gay community cries bigotry, prejudice, intolerance! But when the gay community protests against our traditional American culture – and hatefully embarks on Christian-bashing, cursing, etc. – the culprits are often ignored because our traditional American culture is becoming tolerant of non-biblical ideology, but intolerant of Biblical ideology. Why? The homosexual/gay lifestyle is protected under the erroneously named: “hate-crime” law.

Who is intolerant? Generally, those getting their feathers ruffled and crying INTOLERANCE! are the intolerant ones.

Take another look. In Matthew 5:39 Jesus teaches if anyone insults you, ignore it – turn the other cheek. Don’t fight about it. In Matthew 5:44 and Luke 6:35, Jesus said to love your enemies (and those who disagree with you). In Matthew 5:10-12 the result of Jesus’ teaching is that we should not even fight against those who attack or persecute us for our faith. Therefore, true Christians are the tolerant people, and it is Christian ethics that made us a strong nation. Christianity is the force that allows the intolerant people to decry Christianity.

One of the concepts that helped the United States become the nation of choice is the first amendment to the US Constitution: freedom of speech. It “prohibits the making of any law respecting an establishment of religion, impeding the free exercise of religion, abridging the freedom of speech….” But because of sinful nature, we know this freedom cannot be absolute. Example: overt threats – from whomever – on our person and property should be curtailed.

But our government has violated its own rule. The government HAS made 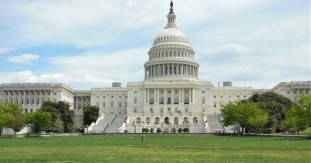 laws respecting (limiting the exercise of) religion – specifically, Christianity – and violated the rule of free speech. Example: our government won’t allow Christianity to be presented in public schools or in many public settings; but other religions, such as Islam, Evolution, and Hinduism, are allowed public freedom of expression, and are actually promoted by the public and educational system. Free exercise of my faith IS impeded because intolerance is politically sanctioned.

True Christians understand fallible humanity; that’s why we present Christ to any and all who will listen. “Know the truth, and the truth will set you free (John 8:32).”

So, I repeat the question: Who is intolerant?

Those who intolerantly demand Christianity to be curtailed and Christian symbols to be removed are the intolerant ones. America, wake up, or your freedoms will be removed by those demanding one-sided tolerance.