What is a miracle? Several years ago, a man told me, “If you can explain it, it wasn’t a

miracle!” I found that rather humorous; but because the man was serious I didn’t want to insult him by laughing. However, that is not a criterion for miracles.

I find two basic types of miracles, with several variations of the theme. 1) Supernatural: God works above, against, or outside the laws of nature. 2) Natural: God uses natural phenomena or natural laws; but inexplicable timing is the key element.

Miracle may be defined as that which takes place by Divine power outside the ordinary course of nature. Miracles are not an end in themselves but are intended to show either the truth of what is taught or the presence of God in the person who teaches. The object of Christ’s miracles was to prove His Divinity so that men might come to salvation.

I agree. The purpose of miracles is to glorify God, although mankind does benefit from them.   Let’s address the supernatural element first; and I want to start by saying that LIFE is a miracle.

The first miracle I find in Scripture is creation. A long-standing scientific principle says, “Matter can be neither created nor destroyed; but can merely change state.” That is: change from solid, to liquid, to gas, and (temporarily) to plasma. You and I create things out of stuff that exists. That is fabricating, but isn’t a miracle. God, Who exists outside time and space, created stuff out of nothing. That’s a miracle.

So, if matter cannot be created, but it exists – and matter cannot spontaneously appear from nothing – we know there is a God Who has always existed outside time and space. God is the great “I AM” – the eternal, self-existent One; the first cause of all things. (Remember that phrase because nothing can happen without a cause. That is also a scientific principle.)

Another above- or outside-nature miracle is raising the dead to life. Stated very simply:

man can neither create life nor restore life; but God – Who is outside time and space – can. Physical healings are sometimes miraculous. And, of course, one of the greatest miracles is exemplified in our eternal salvation. Looking at a baby reveals the miraculous power – and love – of God. But (don’t think I’m being

Now, for miracles in the natural realm.

An example (inexplicable timing) of the second type of miracle is found in Joshua 3:14-17 where the Jordan River stopped flowing at flood-time for the Israelites to cross over. 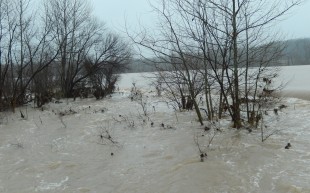 Verse 16 says, “the water above that point began backing up a great distance away at a town called Adam, which is near Zarethan. And the water below that point flowed on to the Dead Sea until the riverbed was dry. Then all the people crossed over near the town of Jericho. (NLT)”

A supernaturally-timed land-slide temporarily blocked the river’s flow. When the nervous priests reluctantly, yet obediently, stepped into the flooded Jordan River, they didn’t know the water level was about to recede. Then, after more than a million people with all their animals crossed over, the temporary earthen dam gave way and a tsunami of water, rocks, and mud came crashing down the Jordan River. God caused the heavy landslide at the right time which blocked and contained the water until the right time. The timing was miraculous.

The Bible records about 37 miracles performed by Jesus, and He said in John 14:13, “If you ask for anything in my name, I will do it for you so that the Father’s glory will be shown through the Son.”

THAT is the purpose of miracles: that the Father’s glory will be manifested, and that His purposes will be fulfilled on earth and in heaven.

Miracles are not for our self-aggrandizement or to puff up our reputation. They are not even primarily for our benefit. This is where many in the Church make their mistake: they focus on the miracle or on what they think they did through “their word” or by “their faith.” We must face the fact that, although man does benefit from them, miracles are for the purpose of exalting God.

So, don’t brag about your faith or your prayers. Learn to align yourself with God. Pray, act, and speak in concert with God’s will, in Jesus’ name, and allow God to receive the credit. He’ll bless you for it.

Just remember: The Bible lets us know that the purpose of miracles is to glorify God.