A friend asked recently, “How do you respond with a good attitude when things go wrong?” I’ve chosen the following examples from personal experience to help answer the question.

It was a cold, moon-lit February night in 1970, north of Seattle, Washington. Getting

off work at the Boeing Aircraft Company just after midnight, I was heading home looking forward to the chocolate cream pie my wife had made. No one else was in sight on the road. I was driving carefully because it had snowed earlier that day, and now a gentle, slushy rain was falling. The temperature was around 30 degrees.

Driving over a small hill, I saw a car stopped beside the road about a quarter mile away. I activated my 4-way emergency flashers and began slowing down. Pulling up alongside the stopped car I noticed a partially frozen stream flowing beside the road. I leaned over, rolled down the passenger window and asked the man standing there, “Can I help you?”

The man said, “No, everything is under control.” Suddenly he looked up. His eyes widened in panic and he yelled “WATCH OUT!!” as he jumped, and tumbled down 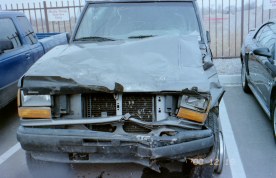 the embankment into the freezing water. Within seconds, a Ford going about 45 miles per hour slammed into the back of my Toyota. But at that moment another man, who had also stopped to help, walked unseen in front of me. The impact hurled my car and me about seventy feet down the slick road; but my car hit the unseen helper. He was flung around like a rag doll, and wound up under the car we had stopped to help.

My immediate thoughts were: What should I do? How should I respond?

Believe it or not, my only injury was a sprained neck which still gives me mild frustration today. As other cars arrived, I asked the first driver to go call for help (no common cell phones in 1970). I directed traffic until the police arrived. The police at first didn’t believe that the driver of my crunched car could walk away – let along direct traffic. But I did. We didn’t discover the man under the other car for another ten minutes.

[Note: The police report verified that the driver of the Ford was careless. His insurance company paid for everything; and yes, the fifty-seven year old man under the car survived. However, he had a massive heart attack, spent four months in the hospital, endured additional years of physical therapy, and was crippled for life.]

After giving my report to the police and undergoing three visits from other lawyers for depositions, my lawyer asked, “What would you like out of this?” That puzzled me. Again, how should I respond?

The lawyer could not believe it when I said, “I do not want to sue anyone; I just want my car repaired. If I honor the Lord, He will meet all my needs.” My car was repaired. Five months later Boeing had a massive layoff, so we moved to New Mexico.

I thought the ordeal was over, but about a year later I was summoned back to Seattle. The crippled man was suing (rightfully so) and a more detailed deposition was required from me. This time I underwent something like an FBI interrogation, and the interrogators’ questions were leading me to spin the 1970 incident in favor of the crippled man. Desiring to support the injured man but maintain total honesty, once again how should I respond?

Asking for my original deposition to refresh my memory, I answered the questions openly and truthfully, and added other details that came to mind. I didn’t bad-mouth the driver of the Ford, but I did remind them the driver was neither alert to what was going on around him nor aware of road conditions. My desire was to be totally open with information and honest in detail. The man won his lawsuit.

In every situation in life we can spin things to our favor, but that would dishonor God and ultimately dishonor ourselves. So to answer the my friend’s initial question (How should we respond?), I determine to be honest and helpful in every situation, regardless of the outcome; and I ask God to help me to make right decisions. That enables me to maintain an accurate memory, a clear conscience, and a good attitude.