In April of 2015, Carol and I went to California to speak at the annual USS

Spending a night in Kingman, Arizona, Carol said, “In 50 miles we’ll get to Arizona Highway 95. Driving south on 95, it is only about 25 miles to Lake Havasu and the London Bridge, and we haven’t seen the London Bridge for about 40 years. Let’s go see it.”

“Your wish is my command, my love.”

Some travelers say the scenery in that part of the country is desolate, hot, and dry. Well, it may be hot and dry in the summer, but I’m not sure it’s desolate: you should see the numerous animals inhabiting the land. And it is beautiful! Between Kingman and the southern tip of the Lake, we took over 200 pictures.

Does the bridge look any different from 40 years ago? It is the same, but the town has certainly grown around it.

But the bridge! Straight from London, it is redeemed history! When you look at the bridge you are looking at part of London in 1831AD. But you see the Stars and Stripes and the British Jack flying alternately on poles on the bridge because it is also now part of American history.

The first bridge over the Thames (pronounced Tĕmz) was of wood construction probably built by the Romans near the village of Londinium prior to Jesus’ time. Destroyed and rebuild numerous times, Henry II chose Peter of Colechurch to oversee the reconstruction of the bridge, but this time it would be a substantial structure. Finished in 1163, it was the last wooden London Bridge. Lasting for over 600 years, it was considered a “wonder of the world.”

But it, too, eventually had to be replaced. John Rennie and his son oversaw the work, and you might say it was a “rock-solid structure” because this bridge, completed in 1831, was made of stone. The bridge weighed about 130,000 tons. The USS Ronald Reagan, a nuclear-powered aircraft carrier, has a displacement of over 103,000 tons, so you get an idea of the bridge’s weight.

However, not having a stable foundation, the bridge sank about one-fourth inch annually. Another problem: it wasn’t made to withstand the heavy traffic of modern society. By 1924, the east side had sunk about four inches lower than the west side. The bridge had become a concern to the community, and they considered tearing it down.

But someone had a novel idea: Council member Ivan Luckin suggested selling the bridge. The rest of the London City Council thought he was crazy! However, with no other viable idea forth-coming, they decided to look for a buyer. Surprisingly, Robert P. McCulloch was interested.

McCulloch is the founder of Lake Havasu City, Arizona – a retirement and real estate development project on the east shore of Lake Havasu. He bought the bridge in 1964 for $2,460,000 as a tourist attraction to his city. But it was a chore getting it to Arizona. He couldn’t just pick it up by helicopter and haul it over. In time, they developed a plan.

The stones of the bridge were individually numbered as the bridge was disassembled, and the plan for reassembly was simultaneously drawn up. The 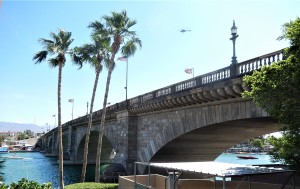 stones were shipped through the Panama Canal to California, then hauled by truck to Lake Havasu, Arizona. The Sundt Construction Company laboriously reassembled it, but modified the plan and reassembly procedure to meet current safety code for bridges. Therefore, the bridge is hollow with substantial steel reinforcement, and was fully reassembled in 1971. The weight of the modified bridge is about 30,000 tons.

The lamp posts on the bridge were made from Napoleon Bonaparte’s cannons, and the bridge has been in two American movies (“Day Of The Wolves” and “Bridge Across Time”). And, of course, it is the world’s largest antique.

In 1960, the bridge was considered useless, and was to be destroyed. But in 1964 Robert McCulluch redeemed it and made it a magnificent, important part of his plan in Lake Havasu.

Jesus did the same for you and me. Having sunk in the muck and mire of sin, 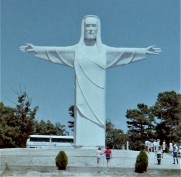 mankind had become useless to God. But God, in the person of Jesus Christ, died on the cross for us and provided redemption for “whosoever will.” All that’s required of us is to stop living to please ourselves, ask God to forgive us for our sin and selfishness, live for Jesus Christ, honor God with our whole life, and help others.

And we will become an important part of God’s magnificent, eternal plan.