For over three years we were pastors of a church in Springer, New Mexico that was 200 miles from our home. Some routes went through winding mountainous roads and took longer. Living in the hills in northern New Mexico and driving the 6-8 hour trip to church and back every weekend – while working 50-60 hours a week at a national laboratory – we were late for church only twice. You may ask “Why did you accept that challenge?” That, and the results of our efforts, is another story for another time. Today’s story is about the trips; and of the eight possible routes to church, we found six that we took quite often.

In all our travels in over 52 years of marriage, we have had fun. Even when we made a wrong turn or were detoured due to highway work, we made a mini-vacation out of it. Last December, traveling from Missouri to home, we decided to take some roads we had never been on. We discovered only one problem: highway 221 turned into a gravel road. We laughed, turned around, and went another direction which took us through Eureka Springs; so we stopped and had dinner before resuming our trek. We make enjoyable memories out of potential irritations in life. But back to the story.

One Sunday morning, one of our deacons asked, “Pastor, what’s on your hands?” I told him I was bleeding. He said, “Blood isn’t that color. What’d you do?” Carol quickly said, “We went through Mora, and picked raspberries yesterday.” 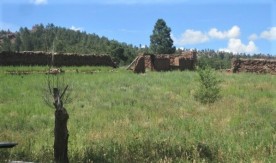 One of our routes to Springer was through Espanola and up the canyon through which flowed the Rio Grande. At La Cienaga we turned east toward Sipapu then over the mountains and down into Mora. And that is where my hands turned red – or maybe, purple. Mora is well-known for its raspberry farm, and Carol had often asked me to stop and pick raspberries. Each time I said something like: “I’m going to be preaching and teaching, and berry-picking isn’t on my mind.” Although that was true, it was also a smoke-screen: I didn’t want to pick berries.

Now, for all you who have never picked blackberries, raspberries, strawberries, etc., let me tell you: I don’t enjoy that activity. We reach inside the foliage to find the berries, and these bushes have thorns containing toxin. Picking berries was both painful and made my arms itch for over a week. Now you might understand why I don’t like picking berries.

But one weekend my Precious wife was so desirous for those delicious, reddish-purple clumps of 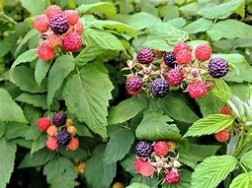 juice, and she was so gentle in her running commentary about how delicious those berries would be in ice cream or made into a berry jam, that my mouth drooled and I just had to stop. When Carol excitedly asked, “Are we going to pick berries?” I said, “Yes. I don’t want to, so this will be a labor of love.”

She was at least partly correct.

That time of year the berries were ripe, and many of them leaked their contents because they split or crushed easily as we picked them. But we left with five quarts, and Carol kept her word: they were GOOD over ice cream, over angel-food cake, in fruit salads, and made into jam. In the long run, I was glad I stopped. (But my hands did get stained with the juice, and I itched for a week.)

do ever for Carol? Where I merely paused on my trip and received a few scratches on my arms, Jesus deliberately left His home in heaven and came to earth to rescue mankind from an eternal separation from God the Father. Jesus didn’t have mere scratches on His arms; the soldiers made a wreath containing inch-long needle-sharp thorns and jammed it onto His head. Jesus purposely allowed Himself to be killed in a gruesome manner in order to reveal the depth of the pain we would suffer eternally without God.

But Jesus doesn’t want us to suffer, and because of Jesus’ labor of love, we can have a home with Him forever. (Romans 8:35-39)

The results of my labor lasted only several months; but the results of Jesus’ labor will never end. I hope you accept God’s Love through Jesus Christ, our Savior. (Luke 19:10, John 3:16)