“The Bible says Jesus was tempted in every way humans are tempted. But Jesus couldn’t have been tempted if he was God (James 1:12-14). Doesn’t Jesus’ temptation prove that he was merely human?”

at question several times through the years, and it reflects on Gnosticism. So, let’s address the general concept of Gnosticism. Many of the gnostic philosophies can be summed in this (over-simplified) statement: Salvation is attained by gnosis – knowledge; Jesus’ death wasn’t necessary, and may not have even taken place; He may not have been God, or he may not have had a physical body.

The controversies continue. Everything that can be questioned about the God-man Jesus Christ has been questioned. The simultaneous natures of deity and humanity united in the person of Jesus Christ have been debated, argued, and killed over throughout church history. Let’s look into it.

The Bible says: 1) Jesus was tempted. 2) Jesus is God. And 3) God cannot be tempted. However, Matthew 22:29 applies here which says, “You are in error because you do not know the Scriptures….” Also II Timothy 2:15: “Study (Scripture) to show yourself approved (honorable, faithful) to God; a workman 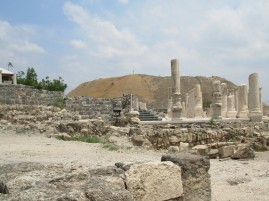 (student) who properly divides (discerns and understands) the word of truth.”

Here are a few Gnostic heresies that date back to Jesus’ time.

Talk about confusion! Yet they all pride themselves on having GNOSIS — knowledge. How can all those conflicting teachings be called gnosis, or knowledge? It doesn’t make any sense!

The uniqueness – and controversy – of Christianity is the Person of Jesus Christ: He is the Divine human being. Matthew 4:1-10, Hebrews 2:17-18, and other Scripture, verify that Jesus was tempted in His humanity; yet John 1:1-3 and other Scripture verify that He is God. This is not a conflicting doctrine blindly imposed on us to accept without question; rather, it is a sobering conclusion founded on strong evidence. This can be difficult to understand, for there is no other God-man in history with whom to compare.

However, back to the question: James 1:13 (“…God cannot be tempted ….”) is not talking about Jesus. The concept of Messiah is not in this specific text. Rather, James was referring to a then-current error making the rounds that justified immorality, which was: “God tempted me.” Remember, the Gnostics believed that our creator-god was evil. James was refuting that heresy while giving general encouragement to the church to live righteously. And He differentiated between Father Yahweh and Jesus the Messiah by referring specifically to Father Yahweh (verse 17: “Every good gift…comes down from the Father….”).

Jesus was and is God: John 1:1 (NLT) “In the beginning, the Word already existed. He was with God, and He was God.” Verse 14 lets us know that “the Word” here is Jesus. Jesus in His humanity was tempted in every manner as man can be tempted (Hebrews 4:15); where Father YHVH was never human, therefore, cannot be, nor has ever been, tempted. He is “un-temptable”. And our Creator God is a Good and Loving God; but Lucifer’s final destination is what the Bible calls the lake of fire.

Much of the New Testament was written to combat the various heresies of Gnosticism; or, as the Apostle Paul said, to combat “a different gospel.” Anything that teaches differently from or in conflict with the message of salvation and Jesus Christ as found in the Bible is a different gospel – which is 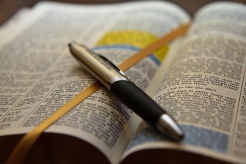 Salvation and eternal life are gained only through the knowledge of and the acceptance of our Lord Jesus Christ. Read about Him. Study about Him. Get to know Him.