Memorial Day! The very sound of the name resonates with deep feelings within the minds of some Americans. Parades with marching bands and the rippling Red and White stripes with the Blue field of white stars (one of the most famous flags in the history of the world) will be a major event in many towns dotting the landscape of the United States of America.

This Memorial Day, let’s take time to honor our fallen Americans and give thanks to Almighty God for the freedoms we have. Memorial Day is a celebration of freedom!

So I want to honor the one who taught me to honor God, my country, and my fellow man. This memorial is about my late father: Captain Stanford E. Linzey, Jr. Chaplain Corps, USN.

Stanford was born in Houston, Texas on October 13, 1920. Always involved in the community, at age 16 he attained the rank of Eagle Scout and became Assistant Scoutmaster of Troop 13.

He lettered in varsity as he played right guard on the high school football team in Mercedes, Texas. He was also first-chair clarinetist in the band; and with his mother accompanying him, he won the Texas State Championship for instrumental solos in 1936.

scholarships. But at age nine, he heard John Philip Sousa and the United States Marine Band on Sousa’s last tour, and Stan developed a burning desire to be a Navy musician.

Nine years later, passing the music test administered by Chief Musician John Liegl (who had been assistant director under Sousa), Stan was sworn into the Navy on January 11, 1939. Sixteen years later when I was nine years old, John Leigl became my own music instructor, for which I am deeply grateful.

At age nine, Stan had also accepted Jesus into his life and suspected that he might become a preacher. He stayed away from alcohol, but by the time he joined the navy he had begun smoking cigarettes. However, a change was coming: he met a beautiful girl named Verna May Hall who liked the clarinet but didn’t like cigarettes.

Verna lowered the boom: “I won’t marry you if you keep smoking.” So Stan decided to quit. But after a two-week cruise on “The Original Fighting Lady” (the USS Yorktown CV-5), Stan came back smelling like a chimney.

“You said you were going to quit.” Verna challenged.

“I tried, but I couldn’t.” Stan was smoking almost three packs a day.

“Did you pray about it?”

But at Verna’s encouragement, he prayed then and there. The Lord helped Stan; but Stan also exercised his God-given will power, and never touched a cigarette again.

When he gave up smoking, Stan also totally rededicated his life to the Lord, and his shipmates nicknamed him Deacon. In everything he attempted to do from then on, he endeavored to honor God.

During the Battle of Midway, the Yorktown was severely damaged by bombs 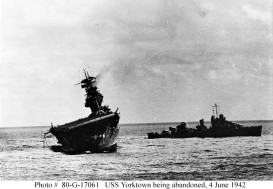 and torpedoes. Believing the ship would capsize, Captain Buckmaster gave the order to abandon ship. The USS Balch, a small warship called a destroyer, rescued Stan and many others. (The Yorktown sunk two days later.)

Stan recognized a sailor who was a Christian and said, “Let’s get together for a prayer meeting.”

The sailor moaned, “Deacon, I’m the only Christian on board the ship.”

Stan didn’t believe it. He scouted around and found eight other men, each of whom thought he was the only Christian on board. Stan got them together for a praise service on the fantail (stern) of the ship. Eventually, thirty-two men met each night as more sailors accepted Jesus Christ into their lives.

Stan was transferred to the USS Portland – a heavy cruiser with 850 men on board. He ordered Gideon Bibles and started a Bible Study group.

After the war, Stan left the Navy, continued his schooling, and in 1954 reentered the Navy as a Chaplain. He spent another twenty years serving the Lord and his country to the best of his ability. He retired with the rank of Captain.

Dad was not loud or boisterous (if he didn’t need to be), but was boldly dedicated to spreading the Gospel of Jesus Christ. Dad taught me that living to please our Lord was more fun than living to please myself or the world. He said quite often, “I’m only going this way once; I might as well make the most of it.” Applied in a Christian sense, I’ve found that to be true.

Dad taught me the motto attributed to Davey Crockett: Be sure you’re right, then go ahead. Of course, I’ve made mistakes, but I do my best to honor God, Country, and Dad.